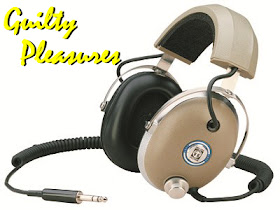 If you want to know some songs that rank on my list of guilty pleasures, you can read and hear more after the break.

These days, Lionel Richie is more likely to be known as the father of Nicole Richie, the one time Pinky to Paris Hilton's Brainless. But there was a time when Mr. Richie ruled the radio waves and sat atop many a hit list. He did this first as a member of R&B superstars, The Commodores, and as a songwriter for other artists. When he sang the theme song for the film Endless Love (1981) with Diana Ross, however, he found himself as a #1 hit artist (as both songwriter and performer) outside of his long-time bandmates. The success of that duet performance gave Richie the confidence to break out as a solo artist. He released his self-titled debut album in 1982. The first single, "Truly," continued the soft ballad style of his Commodore days. But the second single, released in 1983, saw a more upbeat version of a traditional romantic tune, and that's the tune kicking off this Flashback post. "You Are" was very successful. It peaked at #1, #2, and #4 on the U.S. Billboard Adult Contemporary, U.S. Billboard Black Singles, and U.S. Billboard Hot 100 charts respectively. And it was all over the radio. I bought the 45 of this song (and I still own it). My mother also loved the singles from Richie's debut so I bought her the album as a gift, but I ended up playing it more often than she did -- she never really played with the stereo. So, check out Lionel Richie before he was just a reality TV star's dad.

Flashback #2: "It must be a madman's rainbow that I'm chasing."

One of the records my father and I bonded over was Gino Vannelli's Nightwalker (1981). The highly underrated (if you ask me) seventh release from the Vannelli brothers (Gino's brother, Joe, worked with him for much of his carrer), Nightwalker is almost a textbook example of recording engineering genius. I also consider it a milestone in that it shows a clear delineation between 70s excess and the 80s DIY attitude in the studio. Nightwalker is full and lush. You can actually feel a roomful of musicians and equipment, but it never feels overproduced (well, maybe a bit overproduced by mid-80s standards, but not when judged on its own merits). The title track, which is our second Flashback today, leads off with the sounds of city traffic, evoking the very streets that the song's protagonist walks. A keyboard intro is gently woven in. Then, around the 45 second mark, the city gives way to the full sound of Gino Vannelli's band filling your ears and senses. I should also point out that this album marks Vannelli's sidestep from his more R&B and jazz influenced recordings. Pop music was on the rise as the 70s gave way to the 80s, and Vannelli's songwriting shifted to reflect that change. "Nightwalker" is one of Vannelli's more upbeat tunes, which usually don't bode well for him. But here, his former R&B elements are nicely blended with a little rock-tinged pop. It suits his voice well. And I nod my head through the whole song. Now, I never saw the video for "Nightwalker" before this weekend. It's not something that made MTV rotation, but seeing it now convinces me that Vannelli had quite the taste for bombast (or self importance). He didn't have much of a recording career in the US after this record, but he remains a popular performer here, as well as in Canada and Europe.

Flashback #3: "I know a good thing must come to an end | But it's hard to take losing a friend."

Our next Flashback is a guilty pleasure because I really shouldn't like it. Why shouldn't I like it? Because it is a solo effort from Anni-Frid Lyngstad (a.k.a. Frida) who was one quarter of a group whose music I truly cannot stand -- the Swedish pop group ABBA. Frida recorded her debut album, Something's Going On (1982), in the last few months that ABBA was active. Most of the songs were edgier and harder than ABBA's trademark sound, and the record sold pretty well worldwide. The lead single, "I Know There's Something Going On," cracked the top 20 in both the U.S. Billboard Hot 100 and the U.S. Billboard Hot Mainstream Rock Tracks. It sold over 3 million copies worldwide. And if the sound is somewhat familiar, that's because the song was written by English singer-songwriter Russ Ballard while Phil Collins of Genesis produced the track, played drums on it, and sang backing vocals. Now that I think about it, I guess there are plenty of reasons in favor of me liking this tune.

Once again, I remind you that the rule of three applies when doing Flashbacks. As I've made my three offerings, that's all till next week. Dedicated 80s-philes can find more flashbacks in the archives. As always, your comments are welcome on today's, or any other, flashback post. And if you like what I'm doing here, please share the link with your friends. If, however, you don't like the flashback, feel free to share it with your enemies.

And if you are on Twitter, and feel so inclined, please +K my influence in Music on @klout.