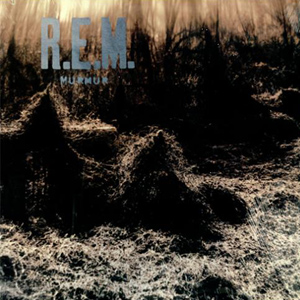 [33 Years of Murmur] -- If you're one of the two people who regularly visit this corner of the interwebz, then you must have noticed: I've been remiss in my blogging duties of late. I won't make excuses, and I won't promise a return to the regularity I previously maintained (a year ago?). but I will offer an explanation. My new day job plus the rapidly approaching end date for current students of the School of Sacred Ministries have combined to consume large swaths of my time. After them, I also have to carve out time to do tech work at my theater. What little time is left, I spend catching up on reading or sitting with my wife to follow our shows. And, trust me, I am very far behind in my reading.

Still, I could not let this week's momentous anniversary go by unremarked.

33 years ago this week -- on April 12, 1983 -- R.E.M. released their debut album, Murmur, on I.R.S. Records. Looking back on that last sentence, I am struck by how much those four boys from Athens, GA, must have liked abbreviations that use punctuation. I did not know about the album until three years letter when, in the first semester of my freshman year at Penn State, I discovered R.E.M. and their first four studio albums. Yeah, I'm one of the reasons R.E.M. is considered a vanguard of "college radio." The band was a huge part of my college experience as well as my first several post-college years. And it all starts with this record.

Given vocalist Michael Stipe's vague elocutions, "Murmur" is probably the best name for this particular record (and a great descriptor for the majority of R.E.M.'s recordings). The folks at Diffuser have said it better than I can with their musings on Murmur's anniversary. So I'll just get right to a few songs now. Did I pick one of your favorites? Well, I didn't pick any singles. If that's a deal breaker, you can just listen to the full album and come back next week to see what I have to offer. Otherwise, read and hear my Murmur selections after the break.

"Catapult" is the opening track of side B (or the seventh track on the CD). I like to think this is a song about a group of kids building -- or wanting to build -- a trebuchet. Gods above know I wanted to build one, or at least play with one, when I was twelve or so.

Who doesn't like the idea of laughing in tune? "Laughing" is the third track (on side A, or just overall).

Is it truly more attractive inside the moral kiosk? Can you really find morals in a kiosk?

Once again, I remind you that the rule of three applies when doing Flashbacks. As I've made my three offerings, that's all till next week. Dedicated 80s-philes can find more flashbacks in the archives. As always, your comments are welcome on today's, or any other, flashback post. And if you like what I'm doing here, please share the link with your friends. If, however, you don't like the flashback, feel free to share it with your enemies.

And if you are on Twitter, and feel so inclined, please +K my influence in Music on @klout.