French President Emmanuel Macron is now openly recruiting scientists and engineers who are disappointed with the US withdrawal from the Paris Climate Agreement. 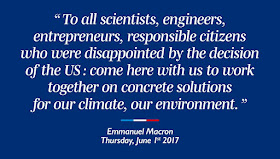 Do you have any idea what happens to the US economy if a critical mass of those sci-tech folks leave for, ahem, greener pastures? Hint: It's not good.

Business itself doesn't "make America great again," which is a BS tag line anyway. It's the people who innovate, disrupt, and build upon bold ideas ... well, they LITERALLY make great things! And people who work on great projects are able to recruit more great people.

So, look at what Canada, France, and Germany are doing. Look at who they are recruiting, and the technologies they are investing in. They will begin to leave America in the dust.

The US is no longer a world leader. World leaders move forward. Not backwards. Hell, you cannot even describe what DJT and the US Congress are doing as "leading from behind." It's choosing to be left behind.